Last month I was thrilled to receive an email from a dear friend who I don’t get to talk to very often these days. It was an email addressed to a group of a us that had all ran together back in the day on various servers, in various guilds & even in other games. She was suggesting we pick a night to plan to hang out together and catch up with each other and just have fun. What an awesome idea. To make things simple, after everyone chipped in some suggestions, it was decided we would do some sort of level 1 gnome race through Azeroth because even those of us who had left WoW for good could roll a new toon for free and participate.

December 14th was chosen as the date and Mumble server information was shared. I was so excited and couldn’t wait for the 14th to get here. I missed hanging out with this group of people and the occasional tweets and random gtalk chats with a few of the members just wasn’t enough. Being able to spend a couple of hours in Mumble would be brilliant. Unfortunately, as the date approached, my company holiday party ended up being that same night. Holiday party starting at 7pm, naked gnome race at 8pm. So I had to split my time a bit between the two and I went to the holiday party from 6:30pm (yeah, first one in the door trying to get my time in) to approx. 08:15 pm and then arrived back home and logged into WoW and Mumble to join the gang at about 8:30ish pm.

I had told them beforehand not to wait on me, so when I finally joined they had gotten their gnomes over to Kalimdor and were racing to the Dire Maul meeting stone. Most of them were in Stonetalon Mountains when I arrived so I ended up rolling a Night Elf real quick to sorta catch up and I headed that way.

Yep, I was the last to arrive at the meeting stone but they didn’t have to wait on me more than 10 -15 minutes or so. There wasn’t a lot of screenshots because there were so many deaths and different routes being taken not a lot of us were grouped up together. Especially me, bringing up the rear. But just talking to these guys in Mumble and laughing together and making fun of each other … it was awesome. It did my heart some good. It was a brilliant idea & I am very grateful I got the chance to participate.

Here’s a screenshot of some of us at the meeting stone. It should be easy to spot the beloved brat who initiated the email and was our fearless leader. Just like the old days. She’s so amazing she just hovers above us all. Lol. Good times. Great friends. Loved it. 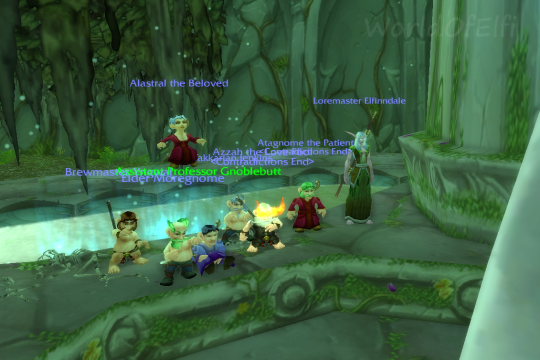 Then on Sunday evening I happened to be in the right place at the right time and was invited to join my guildies Supp and Ulla for a little time spent working on specific achievements through Heroic scenarios. They were trying to complete specific ones they were missing & needed a warm body to queue. I have done heroic scenarios maybe only a total of 15 times and most of those were on my Troll, so I just followed along and didn’t worry about trying to complete certain objectives. Of course, when you’ve barely done anything and then you’re in a group doing very specific thing, achievements will happen. Thanks again for the fun times, Supp and Ulla. I really appreciate it. 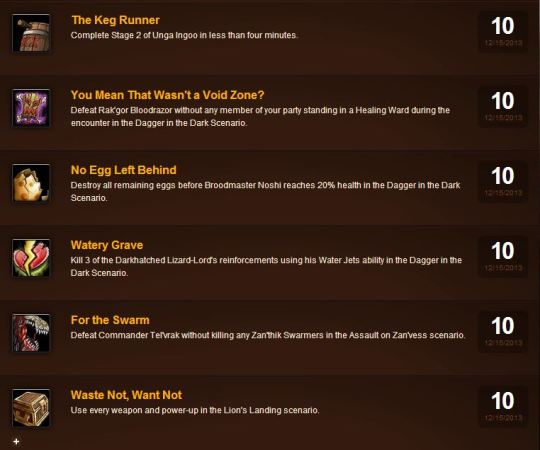 The One Where I Do Something Classy